Why do we make the sign of the cross? Clearly, it is a way of adding to the verbal prayer by sealing with our fingers. So let us ask what is the inherent symbolism expressed in this act? In order to understand the significance we must take into consideration that the sign of the cross until the Middle Ages was made on the forehead and not over the breast.

With this in mind the Old Testament roots of the custom becomes clear. The prophet Ezekiel is commanded by God to put «a mark on the forehead of those who sigh and groan over the abominations that are committed in Jerusalem» (Ez. 9:4). In this context the mark on the forehead is a sign of repentance and protection.

Yet another, more joyous meaning, is also connected with this custom. Pious Jews would mark themselves on the brow with the last letter of the alphabet as a symbol of God’s glory. The last letter is to symbolise the fullness and perfection of God’s creation. In Old Hebrew the last letter, tav, was written as + and later as T. This symbolism is also expressed in archaic Greek where the letter T is written either as + or as X.

Again we are reminded of this letter symbolism in the Apocalypse when the risen Christ is called «the Alpha and the Omega, the beginning and the End, the First and the Last» ( 22:13). However, the letter symbolism was not only used to express Christ’s glory. Marking the forehead with the letter T or +, that is the cross, Judeo-Christians in the Early Church at the same time confirmed their faith and witnessed to the world that they lived in the new reality of the Resurrection of Christ. Thus the mark on the forehead would symbolise the cross of Christ as a sign of repentance and also serve as an expression of the joy of salvation.

Now this double meaning is also reflected in the baptismal ritual as St Cyril of Jerusalem explains the meaning of «the anointing of the forehead» to the cathecumens: «Great indeed is the baptism which is offered you. It is the ransom to captives; the remissions of offences; the death of sin; the regeneration of the soul; the garment of light; the holy indelible seal» (Mystagogical Catechises III:16, Protocatechesis 16). In fact, the understanding of baptism as an anointing and a sealing in the Spirit is common usage among the Church Fathers but has already been used by St Paul and also the Apocalypse (2 Cor. 1:21 f; Eph. 1:13 -15; Apoc. 7:4). 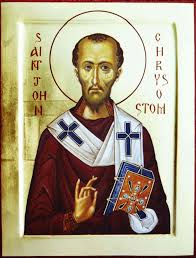 St. John Chrysostom encourages the faithful to cross themselves with these words:

“When, then, you make the sign of the cross on the forehead, arm yourself with a saintly boldness, and reinstall your soul in its old liberty; for you are not ignorant that the cross is a prize beyond all price.

Consider what is the price given for your ransom, and you will never more be slave to any man on earth. This reward and ransom is the cross. You should not then, carelessly make the sign on the forehead, but you should impress it on your heart with the love of a fervent faith. Nothing impure will dare to molest you on seeing the weapon, which overcometh all things.”

The metaphors of ownership and service is especially of help to us in understanding also the time of Advent. The word «advent» stems from military terminology meaning originally «inspection». So, Advent is the time set a part for those bearing the mark of the King. They shall prepare themselves for the coming of the Lord. We do this humbly marking ourselves with a sign of repentance and at the same time knowing that we in Christ are protected with an indissoluble holy seal. In short, we make the sign of the cross because we belong to Christ the King.