The first public claim that Jesus is raised up from his tomb was made by St. Peter on the Day of Pentecost. The Apostle states before the assembled Jews that God by resurrecting the crucified Jesus has made him “both Lord and Christ” (Acts 2:24,36). Using a polished doctrinal formula some twenty years later St. Paul declared that through his resurrection from the dead Jesus was proclaimed to be the Son of God (Rom. 1:3f). By founding the truth of Jesus’ claim to be the Messiah on an historic event, the next question is how the primitive Church came to this astonishing insight. Of particular importance are the witnesses in the gospels of St. John and St. Luke.

The story as told in the Gospel of St. John emphasises the surprise of the disciples at finding the tomb empty. On the first day of the new week, Mary Magdalene, burdened by sorrow, comes, with other women to the tomb, and finds the stone taken away. She concludes that the gardener had removed the body (20:15) and she hurries to inform Peter and John of the theft.

In a state of shock the two Apostles run to the grave. Peter went into the tomb seeing the linen cloths laying in one place and the face cloth neatly folded in a place by itself (20:6f). In the preceding chapter we have been told that the body of Christ according Jewish burial custom had been bound in strips of linen with 100 pounds of spices (19:39f). On this background, Peter apparently finds Mary Magdalene’s explanation impossible. For if stolen, the gardener would not have been able to separate the body from the linen wrappings. The narrative seems to imply that Peter stands there perplexed and irresolute.

Peter’s confusion is then contrasted with the reaction of John, the disciple Jesus loved. The narrator tells that he “saw and believed” (20:8). Previously, we have been told that John, standing with the women under the cross, was the last of the disciples to leave Jesus on his way to Golgatha (19:25ff). Now he is presented as the first believer in the new Covenant.

Abruptly, the narrative now turns to the other disciples telling that they were unable to grasp what had happened. The narrator states: “For as yet they did not understand the Scripture, that he must rise from the dead” (20:9). The meaning is clearly that this is what John had understood and believed. The empty tomb is the confirmation that the crucified is “both Lord and Christ” – as Peter declared on Pentecost Day.

Subsequently, the narrative relates that the risen Lord appears to Mary Magdalene, Peter and the other disciples. These appearances take place in the evening on the same day, the first day of the week, with the exception of Thomas who comes to belief eight days later. His conversion is set as an example for those later disciples “who have not seen and yet have believed” (20:29).

On the way to Emmaus

The resurrection story in the gospel of St. Luke follows the same pattern. We hear of Mary Magdalene and the other women going to the grave on the first day of the week and returning to tell the apostles that stone was rolled away. Peter, running to the tomb, marvels to find the linen cloths lying by themselves (24:12). 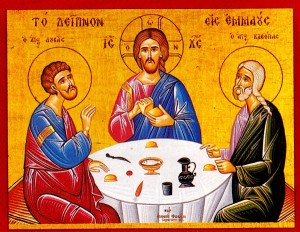 The story then introduces the two wanderers to Emmaus and their conversation with a stranger whom they finally realise is the risen Lord. This identification takes place in two steps. Firstly, the Lord makes them understand his passion and crucifiction saying to them: “Oh, how foolish you are, and how slow of heart to believe all that the prophets have declared! Was it not necessary that the Messiah should suffer these things and then enter into his glory?’ Then beginning with Moses and all the prophets, he interpreted to them the things about himself in all the scriptures” (24:25-27).

Sharing a meal with him, the two finally understood who the stranger was when “he took the bread, blessed and broke it, and gave it to them. Then their eyes were opened, and they recognised him; and he vanished from their sight. They said to each other, ‘Were not our hearts burning within us while he was talking to us on the road, while he was opening the scriptures to us?’“ (24:30-32).

The narrative then ends with the risen Lord appearing to the Apostles on the same day: “Then he opened their minds to understand the scriptures, and he said to them, ‘Thus it is written, that the Messiah is to suffer and to rise from the dead on the third day” (24:45-47).

The Passion opens the Scripture

In this way, both the Gospel of St. John and St. Luke include the Eucharist in the passion and resurrection story. The death on the cross was only the end of the earthly life of Jesus. After the resurrection the living Lord is present in the community meal where he feeds the disciples with the bread of Life (John 6:53ff, 19:34, 21:12f; Luke 24:36-41).

To understand this we must use the cross of Christ as the key which opens up Scripture for us. Christ is “Dominus et rex Scripturae” for in his death and resurrection the glory of God is revealed. With this starting point, a new event, Scripture can be read with coherence correlating Adam and Christ in the economy of salvation. The reign of sin has been replaced by the reign of Grace as St. Paul writes to the Romans: “For if the many died through the one man’s trespass, much more surely have the grace of God and the free gift in the grace of the one man, Jesus Christ, abounded for the many” (Rom 5:15).

Theological conference of the Union of Scranton: "God be in my thinking - The intellectual background of the secularization", Mainz, Germany.

Clergy meeting of the Nordic Catholic Church in Scandinavia, Oslo.

Talks with The Mission Province, Oslo.

Episcopal visitations in France, Germany and the UK during the autumn.